We have become, to an alarming extent, used to social and ethical erosion in South Africa. Our lives have also been adapted accordingly. This is a trend that should be arrested and turned around. Trees and plants might just teach us how this can be done. Let me share a few examples to demonstrate the point.

The effectiveness of the South African Police Service has deteriorated dramatically in recent years. Reporting of crime has become a mere ritual without much expectation that anything will be done by the police about the reported crime. As a result, many people now need to rely on private security firms to provide them with the protection that the police were supposed to offer. This amounts to an additional expense for those who can afford the services of a private security company.

More recently, we also started experiencing disruptions in water supply in both rural and urban centres in the country. There seems to be a looming problem with a clean water supply that might expand to other parts of the country. Once more, citizens and organisations had to pay out of their own pocket for water storage facilities to bridge periods of lack of water supply. In some cases, local communities stepped in to fix municipal water infrastructure at their own cost.

Similar sad tales can be told about the deterioration of our road infrastructure and the record number of potholes in roads in cities and rural areas. Our acceptance of social erosion is not confined to essential services like policing or key infrastructures like electricity, water, and roads, but has also crept into the acceptance of corruption and unethical conduct in organisations. In the most recent edition of the Ethics at Work Survey that was conducted by the UK-based Institute of Business Ethics, it was found that South African employees display a greater tolerance for accepting dishonesty and unethical practices in the workplace compared to the other countries who participated in this international survey.

The resilience of South Africans to find ways of coping with the erosion of essential services and key infrastructure can be applauded, but there is also a dark side to it, as can be seen in the acceptance of unethical conduct as normal or inevitable in the workplace.

In a recent speech, President Ramaphosa called on South Africans to not lose hope in the future of South Africa. It is indeed important that we should not lose hope. However, hoping for the government to turn the current situation around is not a very hopeful exercise, given their track record of service delivery and large-scale corruption.

What is needed more than hope at the moment is the refusal to accept the erosion of essential services, key infrastructure, or the erosion of ethical standards as normal. Should we do so, we would fuel a downward spiral to the bottom.

It is understandable that people get despondent and that there is a dark mood in the country as we approach the end of 2022. It is however worth remembering that the future never has been and never will be a mere continuation of the present. There is always the possibility of changing the current situation for better or worse.

What is needed are acts of resistance to accepting the current social and ethical erosion as the norm.

It is here that we can take a leave out of the book of trees and plants.

Trees have the remarkable ability to absorb carbon dioxide, which is causing havoc to our planet and societies, and then releasing oxygen into the atmosphere. They thus have the ability to arrest the negative and convert it into something positive. It is exactly that ability that we also need to emulate when dealing with the social and ethical erosion in South Africa.

Trees and plants also have another ability besides arresting carbon dioxide. They have the ability to arrest land erosion. One of the best approaches to fight land erosion is to cover eroded patches of ground with plants or trees to stabilize and eventually stop erosion. This is another characteristic of tree and plant life that we need to emulate on a societal level.

It can be done. We should be like the humble indigenous plant, the Spekboom (Portulacaria Afra), which is not only one of the most prolific producers of oxygen but also an excellent stabilizer of ground erosion.

Over the last years, we have seen how numerous key state institutions that have been seriously eroded and hollowed out during state capture, have been restored and recapacitated to fulfill their intended purpose. The South African Revenue Service (SARS) and the National Prosecuting Authority (NPA) come to mind as examples of key state institutions where that erosion has been arrested and serious strides have been made on the road to recovery. Admittedly more can be done but the erosion has been arrested and these organisations are starting to be a force for good again.

Similarly, in local government, there are clear signs that at least some cities and towns are not willing to accept that unreliable power supply and disruptions in water supply should be accepted as normal and an inevitable part of living in South Africa. Their resilience and resolve to provide reliable electricity and water supply to their communities are exactly what is needed to arrest the erosion.

Some companies that engaged in highly unethical practices during the era of state capture have also succeeded in arresting the ethical erosion in their midst. In turn, they have started restoring their integrity and consequently also succeeded in regaining the public trust that they lost. Companies like KPMG and EOH come to mind in this respect.

The erosion can be stopped. And every time that a person, community, organization, or government institution succeeds in stopping the erosion, they become stable points on a slipping slope. This makes it easier for others to follow suit. 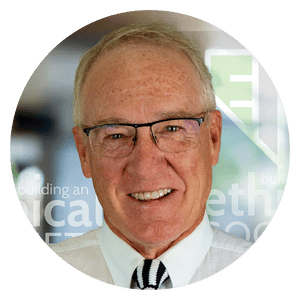 About the author: Prof Deon Rossouw is the CEO of The Ethics Institute and an Extraordinary Professor in Philosophy at Stellenbosch University.