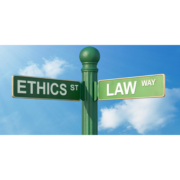 This article is a condensed version of the original scientific article that was published in: Business Ethics, the Environment and Responsibility, and can be obtained at:

This version of the article was rewritten to present a non-academic manuscript that would be easily readable and understandable to the layperson. As such, all citations and references have been removed. Please consult the original article for the scientific substance underlying the conceptualisations and the citations and sources consulted.

The precarious popularity of combining ethics and compliance

Conceptually, ethics and compliance can be viewed as opposite ends on a continuum of moral behaviour and are supposed to add complementary value to each other. A compliance approach provides essential governance to meet legal and regulatory requirements, whereas an ethics approach promotes moral self-regulation based on values and integrity. It is often believed that combining compliance and ethics should promote a balance between control to discourage legal transgressions (compliance) and moral self-regulation to encourage an ethical culture to flourish. However, the domination of compliance in its legalistic orientation over promoting ethical values is consistently confirmed in research. Moreover, running ethics programmes from a compliance-based structure tends to be at the peril of ethics. Although compliance may lead to improved legal awareness, it does not promote ethical behaviour beyond compliance. Combining ethics and compliance can be deceptive in the face of its potentially adverse influences on ethical behaviour, notwithstanding anticipated synergies. This paradoxical outcome stimulated this inquiry to find answers

There is increasing recognition that much of what drives behaviour and decisions are rooted in the unconscious – i.e, mental processes of which the individual is unaware, but nonetheless exert a direct effect on behaviour. Systems psychodynamic theory (SPT) is useful to uncover unconsciously motivated systemic drivers of perplexing phenomena in organisational systems. By making the unconscious mind and its workings conscious, systems psychodynamic interpretations construe explanations of potential behavioural forces. The systems psychodynamic inquirer takes an interpretive stance, scrutinises, and interprets observations of the organisational system in terms of SPT to extract cues about what could be happening, which are driven by plausibility rather than indisputable accuracy.

Executives are experiencing more anxiety than ever before. Anxiety in small quantities can be beneficial to keep one focused on goals, whereas excessive anxiety can be overwhelming. In order to contain anxiety, psychological defences such as denial, projection and rationalisation are unconsciously mobilised to fend off its paralysing effects. Although defence mechanisms contain anxiety at tolerable levels, they have a deceptive ability to overpower rational thinking.

Ethical scandals create widespread social resentment, casting doubt on the competence and character of executives in general. In the meantime, the media, the public and organisations’ boards project a fantasy of omnipotent control onto executives – the ability to regulate everyone and everything in their organisations. Executives must cope with simultaneous feelings of anxiety and projected omnipotence. When executives identify with these projections, they assume custody of these fantasies, which increase their anxiety.

A compliance orientation attributes ethics or compliance failures to insufficient governance and control. Although control is indispensable to provide guidance and standardise regulatory approaches, anxiety often leads to over-control. Control and punishment of misconduct signal to stakeholders that the organization upholds standards. Being in control represents a badge of honour, whereas the apparent lack of control is a sign of incompetence. The need for control can be more easily contained through a compliance focus because of its clear prescriptions, rather than through the ambiguity of ethics.

However, an over-reliance on control tends to transmute into an ‘audit culture’, in which ethical principles are bureaucratised, with those who develop rules and regulations doing moral thinking on behalf of others. Personal accountability is then replaced with control under which individuals are subjected to the scrutiny of compliance auditors. This erodes moral self-regulation, causing employees to feel less accountable for the ethical consequences of their decisions. In contrast, an ethical culture is effective in rendering both ethical and compliance behaviour because ethics, which is rooted in self-regulation, stimulate psychological ownership of one’s actions.

Ethics and compliance represent two distinct disciplines originating from different fields of science. Compliance is rooted in legal, accounting and auditing sciences, which objectives are to ensure that the organisation and employees remain within minimum legal regulations. Compliance with the minimum letter of the law represses moral conscience and dilute morality to legal absolutism, causing the organisational culture to regress to a low-road ethical approach. In contrast, business ethics stems from moral philosophy and organisational behaviour. Ethics is about doing what is morally right, beyond what is required by legislation. Control is rooted in intrinsic self-regulation and psychological ownership of moral behaviour, rather than in extrinsic regulatory control.

Most compliance officers have a legal or auditing background and are trained to provide authoritative interpretations of rules and regulations, rather than focusing on ethical norms. They tend to have a legalistic interpretation of moral challenges and identify uncritically with the rule-based nature of compliance. Compliance officers tend to function from an external locus of control – authoritative legislators decide what is right and wrong on their behalf.

In contrast, morality and values are more ambiguous and open to interpretation. Ethics officers must be able to work with much less proscription and from an internal locus of control; they work with much more ambiguity, yet still take accountability for their actions. Hence, it is unsurprising that most CECOs identify more strongly with being a compliance officer than an ethics officer and it is unrealistic to expect them to be equally strong advocates for both high-road ethical behaviour and rule-based compliance.

When combining ethics and compliance, the rule-based nature of compliance offers more psychological comfort and behavioural clarity than the ambiguity that accompanies ethics. Inevitably, compliance grows to become ‘more equal’ than ethics and dominates ethics.

Employees are intrigued with top management as imaginary parental figures who must be followed and obeyed. They scrutinise executives’ actions for implicit messages and cues about acceptable ways of thinking and behaving. When executives combine ethics and compliance, they send a message that ethics equates to compliance, implicitly endorsing a culture of moral mediocrity. It is to be expected that when ethics and compliance coalesce, compliance becomes ‘more equal’ and dominate ethics in the collective unconscious of the organisation.

The attraction of combining ethics and compliance

The urge for structural solutions raises uncertainty as to what this structure should look like. Rooted in early childhood, we have a dependency on parental figures to protect us from danger and tell us what to do. Dependency triggers anxiety entrenched in the insecurities that stem from becoming accountable for one’s actions. Dependency manifests in executives as feelings of inadequacy and insecurity. Executives may then project their anxiety onto authoritative institutions as imaginary parental figures to provide guidance on how to design the structure. There appears to be a universal trend to discuss ethics and compliance as a singular construct in authoritative literature and legislative regulations. This fusion appears to be assumed as a cue that ethics and compliance should coalesce. Adhering dependently to presumed prescriptions of legislative regulations alleviates anxiety and fends off apprehension that the organisation can be taken to task (or even to court) should something untoward happen. However, as far as could be established, none of the relevant regulations notes an expectation that ethics and compliance must be combined.

When executives perceive they are not in control, they feel incompetent, which gives rise to the anxiety of being exposed as imposters. It is a common phenomenon that organisations become obsessed with control out of a fear of losing control. Aggressive attempts to gain control often results in excessive regulations and audits.

When an entity cannot contain its anxiety about not being in control, it tends to project the anxiety onto another part of the system as a scapegoat. Executives then project lower-level employees as the ethically risky ones whose behaviour needs to be regulated. Projective anxiety often results in knee-jerk policymaking and auditing. This dynamic increase pressure to replace adherence to aspirational moral values with formalised control, rendering the combination of ethics and compliance as an attractive structural option.

“We did not do anything illegal!” is a popular rationalisation when organisations are exposed as being involved in technically legal, but unethical, activities. Much of the lure of combining ethics and compliance is rooted in the rationalised freedom that compliance provides to enact ethically questionable behaviour, as long as one does not transgress the letter of the law. The rationalisation that legal compliance is morally sufficient lower ethical expectations while maintaining phantasies of being morally legitimate. Rationalisations allow executives to justify ethically questionable acts, repressing feelings of guilt. This psychological comfort entices organisations to combine ethics and compliance.

If you want more information, you are welcome to contact the author at: mias.deklerk@usb.ac.za.

Was I brave and strong and true?
Scroll to top