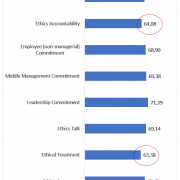 The Ethics Institute recently conducted research to determine the extent to which organisational ethical culture contributes to ethical failures. The survey was done in 19 medium to large private sector organisations across all industries. A total of 2791 employees participated in the survey.

The King IV report on Corporate Governance indicates that corporate governance is the exercise of ethical and effective leadership by the governing body towards the achievement of an ethical culture, good performance, effective control, and legitimacy. Progressive thinking that occurred between the 3rd (2009) and 4th (published in 2016) King reports on corporate governance resulted in a governance principle that evolved from simply ‘managing ethics in organisations’, to the ‘establishment of an ethical culture’ as a key component of ensuring an effective organisation.

Our research indicated that an ethical culture is characterised by a combination of the following components: ethics accountability and responsibility; the commitment of non-managerial employees, middle management and leadership (senior management) commitment to ethics; ethics talk; the ethical treatment of people; and ethics awareness in the organisation.

It can be seen in the figure below that the two main culprits that contribute to weak or underdeveloped ethical cultures in the private sector are (1) the ethical treatment of people and (2) ethics accountability and responsibility. It would appear that these two aspects are the most problematic for most private sector organisations.

This means that the private sector may not effectively hold people responsible for their behaviour or treat employees in an unfair manner. This has major repercussions for the work-engagement and well-being of employees and may result in counterproductive work behaviour. 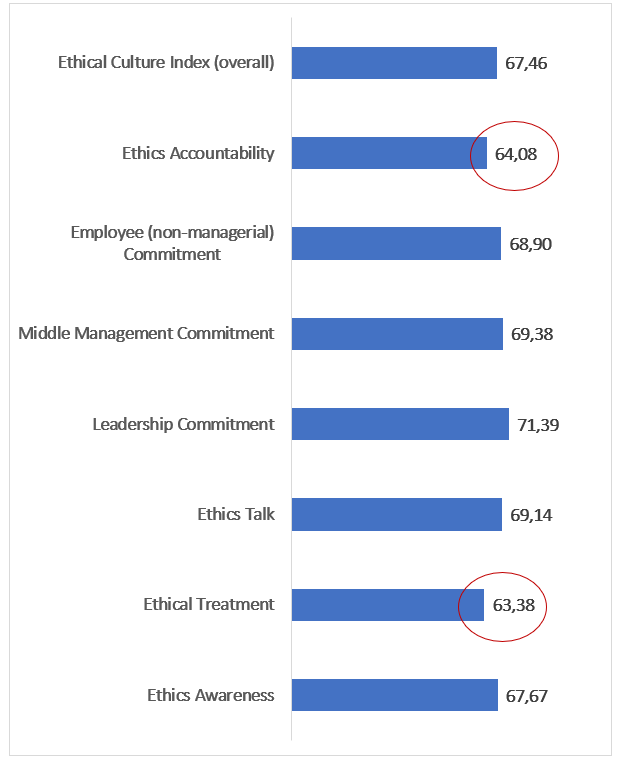 Employees may lash out against this in different ways by engaging in counterproductive work behaviour. Examples of counterproductive work behaviour are presenteeism (being at work but not working), theft, insubordination, verbal and physical sabotage, and anti-social behaviour. It has also been linked to outcomes such as work stress, burnout, and damage to the social contract between employees and employer. If this breakdown of the social contract continues unabated, it affects the recruitment pool from which the organisation draws its talent, thus resulting in a downward spiral. Such behaviour is often caused by the self-isolation by members of the so-called ‘C’ or ‘E’-suites that rapidly lose touch with the reality of being a supervisor or employee, when they are promoted to the top floor with its private elevator and plush carpeting. Decisions at this time only need to satisfy the requirement of being ‘within the law’, irrespective of any ethical considerations.

Another stakeholder that may be exposed to (un)ethical treatment is the organisation’s suppliers. Suppliers play a pivotal role in ensuring that the organisation remains productive. These relationships are often damaged by a lack of respect and fairness and manifests in late payment, arrogance, bullying, withholding of information or favouritism. This could mean that the suppliers become apathetic, which, in turn, results in unreliable, substandard and even the provision of dangerous goods and services. This of course always causes harm to the consumer in the long run. In South Africa, SOEs in particular have learned first-hand of the negative impact of harming supplier relationships, as the best suppliers avoid doing business with them due to the ethics and financial risks involved.

The other main culprit that undermines the development of healthy and sustainable ethical cultures is a lack of ethics accountability and responsibility. That is, the degree to which employees are held accountable for their conduct and decision-making and whether fair and transparent sanctions are provided for unethical conduct. This, however, is not only limited to non-managerial employees. The trend in many organisations is to come down hard on non-managerial employees, even when the transgression can be classified as minor, e.g. the theft of a tool, yet to be silent on executive and managerial wrongdoing or to sweep such transgressions under the carpet. Justice is seldom dispensed transparently, swiftly, assertively and consistently across hierarchical levels and divisions.

So, what to do? Getting the organisation onto a track of strengthening its ethical culture is not that complicated as may be expected. Sure, ethical culture is an abstract concept. Yet, there are ways to positively influence culture. Organisations make decisions that affect the lives of their stakeholders, and employees in particular, on a daily basis. They then communicate these decisions. Or communicate the decisions somewhat. Or not. The fact is that every decision or action, whether communicated or not, sends a message to stakeholders.

Think of it in terms of a green light versus a red light analogy. When organisations make decisions that contribute positively to the formation of an ethical culture, green signals are sent to stakeholders. Examples here are the employment of and engaging with ethical employees and suppliers, overtly disciplining those who transgress ethically, promoting people on merit, talking about doing things in the right way, and being circumspect on what you as an organisation spend money on. Red signals are sent when unethical people are appointed or engaged with as a matter of course, failure to decisively deal with ethics transgressors, rewarding unethical behaviour, retrenching people to make the income and expenditure sheet look good, showing clear favouritism in promotions, talking the ‘bottom-line only’ talk and spending money disproportionately on non-essentials such as building new headquarter structures or entertaining lavishly (or even obscenely).

When organisations are advised to build strong ethical cultures there is often scepticism, fear of the abstract nature of culture, or the question ‘but where do we start’. Building ethical cultures are in fact not that abstract, vague and fuzzy. The sending of signals are within the control of everyone in the organisation. Having strong power bases senior leadership and management are ideally positioned to send green or red signals. It becomes a simple choice.

In stimulating the formation of strong ethical cultures, as per the King IV Report requirement of establishing ethical organisation cultures, organisations could do three things, and in the following order: (1) assess the strength of your ethical culture – is it weak, underdeveloped, developing or mature?, (2) send green signals overtly and subtly, (3) re-measure the strength of the ethical culture to gauge improvement. In this way organisations will deal with the main culprits that undermine culture formation, namely ethical treatment of employees and demonstrating ethical accountability and responsibility.