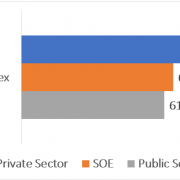 by Dr. Paul Vorster and Nicole Konstantinopoulos| Published on 26 February 2020 for The Ethics Institute monthly newsletter

South Africa is in trouble. State-owned enterprises (SOEs), which have the responsibility to ensure that crucial services are provided to enable the critical functioning of the South African economy, are failing. One doesn’t have to look far to see the dire effect of blackouts (i.e., loadshedding), ineffective rail infrastructure, or the numerous incidents of public looting and mismanagement at SOEs responsible for financial investment and development.

South African Airways (SAA), PRASA, Transnet, ESKOM, Denel, the SABC and many others are fighting for their financial sustainability and have reneged on their core mandates. Many of these institutions blame strategic, financial and/or operational risks for their current state of affairs. However, the one thing that all these organisations have in common is a lack of basic ethics oversight and management.

Almost all of these SOEs have been embroiled in ethical failures, usually from a governance of ethics standpoint, and have been implicated in state-capture, wasteful expenditure, employee intimidation, procurement fraud, employee and leadership incompetence, and the inability to meet the core mandates for which they were initially formed. It is interesting then that ethics risk is still viewed as different from strategic, operational and financial risk. One could convincingly argue that these organisations and their operational, strategic and financial failures are strongly correlated with their ethical failures, perhaps even caused by them.

The King IV Report on Corporate Governance for South Africa emphasised that it is the responsibility of the governing body (i.e. the board) of any organisation to ensure effective leadership based on an ethical foundation. The King IV report went even further, indicating that corporate governance is the exercise of ethical and effective leadership by the governing body towards the achievement of an ethical culture, good performance, effective control, and legitimacy.

Research indicates that these aspects are crucial for organisations to be sustainable over the long-term. Organisations that emphasise these factors do not suffer from ineffective leadership and are much less likely to be involved in ethical failures or public scandals.

Comparison of ethical culture across the private sector, SOEs and the public sector 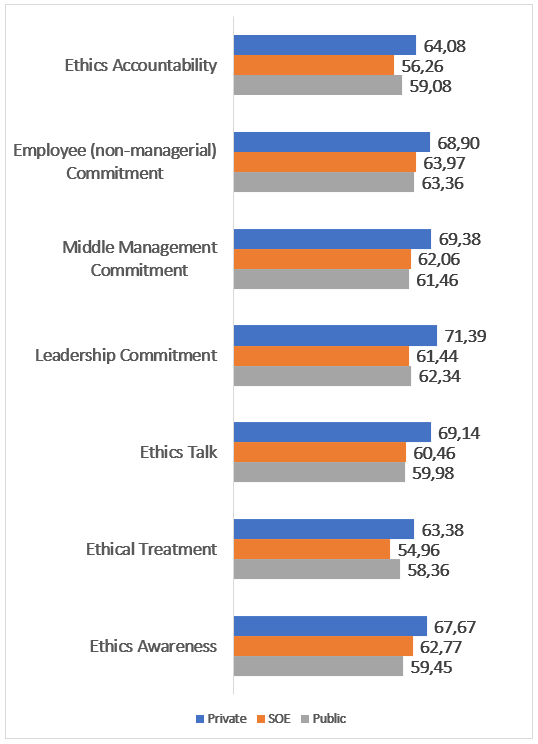 These results indicate that in comparison to the private sector, SOEs have substantially lower leadership commitment to ethics. Additionally, employees feel less respected, unfairly treated and less open to discuss ethics and the ethical implications of business decisions than in the private sector.

Looking closely at the profile of SOEs it can be noted that they obtained their lowest scores on ethical treatment of employees and on holding employees accountable and responsible for their behaviour and decisions. These results could indicate why SOEs are failing.

If employees are not held accountable for their behaviour and if they feel unfairly treated a low morale environment with possibly condoned unethical practices may prevail. Behavioural research has also demonstrated how counterproductive work behaviour (i.e., antisocial behaviour, theft, disrespecting or misusing organisational time and resources etc.) may prevail in organisations where employees feel mistreated or unfairly treated. Accountability failures are clearly problematic as the organisation does not enforce what correct and productive behaviour is. This may not only result in ethical lapses, but also negatively affect the effectiveness and productivity of the organisation.

Although direct comparisons between SOEs  and the public and private sectors are useful, it is also important to evaluate what the ethical culture within the SOE sector looks like. For example, what are ethically effective SOEs doing differently when compared to their less effective counterparts.The differences between top performing SOEs and bottom performing SOEs regarding ethical culture are inicated in Figure 3. 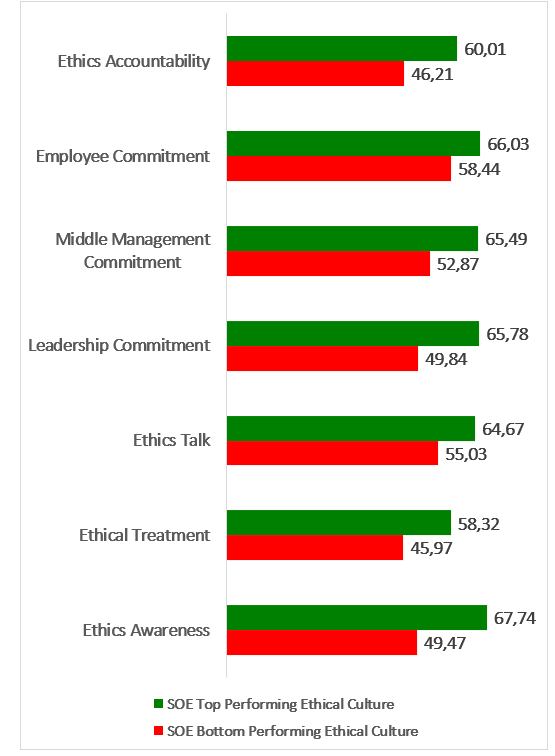 This indicates that SOEs with weak ethical cultures do not have a general awareness regarding the importance of ethics for business, have leaders that are not visibly committed to good ethical conduct, and do not hold employees accountable for unethical behaviour. Ethically ineffective SOEs seem to have a flagrant disregard for the importance of ethics.

On the positive side, these ethical culture differences may point to a possible solution for the dire state SOEs find themselves in. Recently, rating agencies and the World Bank called for structural reform of the SOE sector in South Africa. Put simply, SOEs need to change the way they operate and meet their mandates to remain relevant and execute the critical supporting role they play towards the effective functioning of the South African economy.

SOEs can go a long way to reach this goal by ensuring improved and legitimate leadership commitment to ethics, improve ethics awareness amongst employees at every level, treat employees with respect, fairness and dignity, and ensure that employees are held accountable for their behaviour. The recipe is simple, the application will need some work.

Simply privatising SOEs may not necessarily be the answer. In their current state, privatisation may result in failure. SOEs are not well geared to the private sector and are not yet ready for the direct feedback from the markets in which they operate. Due to their insulation from direct market pressures, and their stakeholders, they have not adopted a stakeholder focus (i.e., meeting the legitimate expectations of those dependent on their services).

To simply privatise now could mean that these organisations would be unable to compete and operate effectively. In short, the shock of privatisation may result in the death of these organisations. What is needed before privatisation is considered is the need for good corporate governance and a focus on building ethical cultures. Ethics is stakeholder focused and about meeting the goals of the organisation in a manner that is responsible and sustainable. SOEs need to get this right and focus here first. Perhaps once they are off life support (i.e., government bailouts) they will be able to meet their mandates and compete in the private sector. At the heart of getting there is acting ethically and ensuring that ethical cultures are cultivated.

Dr Paul Vorster is a Research Specialist at The Ethics Institute. He holds a doctorate of Industrial Psychology, which he attained from the University of Johannesburg.

Nicole Konstantinopoulos is an Intern at The Ethics Institute. She is currently completing her  MCom in Industrial Psychology at the University of Pretoria.