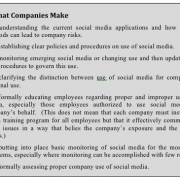 Social media is a challenging topic because it crosses over so many ethics issues.  However, like any other ethics topic, it can and must be proactively managed for an organisation to safeguard its reputation and provide its employees with the tools to manage their own personal and business activities.

Social media is a challenging topic because it crosses over so many ethics issues.  However, like any other ethics topic, it can and must be proactively managed for an organisation to safeguard its reputation and provide its employees with the tools to manage their own personal and business activities.

A study by the Ethics Resource Centre (ERC) found that most social networkers engage in mostly passive activity – looking at friends’ photos, observing Twitter commentary, or seeking information. But a group they call “Creators” actively posts commentary, write blogs, and share ideas (often about work) for the world to see.

Social networkers talk more freely than non-social networkers about their jobs and their company. Although social networkers claim that they think about the risks before posting something online and they consider how their employers would react to what they post, the study found that they do air company linen in public. Six of ten active social networkers would comment on their personal sites about their company if it was in the news, more than half said they shared information about work projects once a week or more, and more than a third said they often commented, on their personal sites, about managers, coworkers, and even clients. As a result, workplace “secrets” are no longer secret, and management must assume that anything that happens at work; any new policy, product, or problem, could become publicly known at almost any time.

Even though employees may misuse social media, it remains a powerful tool that companies can use to promote ethical practices and organisational culture.  The ERC report National Business Ethics Survey of Social Networkers: New Risks and Opportunities at Work, highlights that to more effectively engage employees, enhance ethics and compliance programs, and positively affect workplace culture, organisations should tap their employees’ expertise and encourage workers to use social media. The key is to seize the opportunity of having tech-savvy employees who are invested in the organisation while mitigating the risk of inappropriate postings.

According to ERC President Patricia J. Harned, active social networkers “have a really strong interest in the culture of the workplace. They are more likely to be responsive if you’re making use of social networks to address company culture and employee concerns.”

Some findings may come as a surprise. Among them: 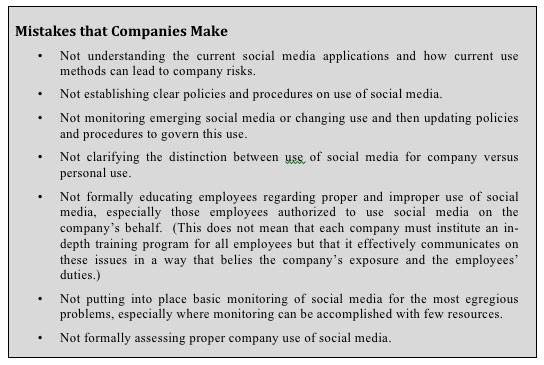 What can companies do to prevent the unethical use of social media?

Communicate:  Have a clearly documented social media policy. Employees need to know whether they may, for example, post the company logo on Facebook or whether they are authorised to post something online about the company’s retrenchments.

Train: Consider social media training during new-hire orientation with special emphasis on the limitations set by the policy, the ethical use of social media and privacy settings.

Review: Use surveys or internet/security monitoring to gauge whether the policy is working. Is inappropriate or sensitive client information being posted online? Consider highlighting examples of employees (names can be removed) who were dismissed for breaching social media protocol.

The recommendations of the Third King Report of Governance for South Africa 2009 (King III) for an effective ethics programme have served as an important framework for organisational ethics management programmes and can be effectively applied to a social media initiative. As social media is so much a part of ethics topics, e.g. sexual harassment, bullying, leaking of confidential information and conflicts of interest, it should be well integrated in and part of an organisation’s overall ethics programme.